I remember my mother saying about one car she drove when I was a child, "It's like driving a lumber wagon." Pan forward about 20 years and I got a firsthand experience of what she was talking about. I was about an hour's drive from home on a Sunday evening when my power steering belt broke. Nowhere to get it repaired, so I was left having to drive it home without power steering. While I've never driven a lumber wagon, driving that car home was about what I would imagine it would have been like. Well, this past Sunday, I got a chance to drive the "lumber wagon" of long arm quilting machines.
I have used several different APQS machines (Millie, Freddy and Lucey, I think). More recently, I had the opportunity to "drive" a Tin Lizzie and a Pfaff Powerquilter. And I've been happy, for the most part, with all of them. However, I needed to get my entry quilt for Johnson's Sewing Centre's quilt challenge quilted. As a Seventh-day Adventist, I don't quilt on the Sabbath (Saturday). And I didn't have a day off - other than Sabbath and Sunday - until this coming Friday, which is the day I plan to take the quilt to Johnson's, so I didn't have time to quilt during the day and wasn't sure if my LQS would allow me to come in after hours to quilt it. And no place was open on Sunday. So, I resorted to following up on an ad I had seen months ago on kijiji. A woman was willing to rent her machine for $75 a day. I hadn't actually pursued this option previously because it was about an hour's drive to get to her place, and I wanted to have more than one quilt top ready to make paying for the day and driving that distance worthwhile. And then I discovered I could rent at my LQS for $35/quilt, so the kijiji ad no longer seemed worthwhile. However, I needed to get this quilt quilted and was running out of options. So I booked the time with her and Sunday morning loaded up Stars Over Africa and Evening Snowfall quilt tops and made the trip. I don't even recall what brand of machine she had, but as I started to quilt, I kept thinking the machine wasn't gliding smoothly like the other machines I had used, like maybe it needed a shot of WD40. It felt heavy and cumbersome. I was using the Fluffy Clouds pantograph, but my clouds didn't turn out very fluffy because the machine was so difficult to "steer." They came out looking sort of squarish, with rounded corners. Not exactly the look I was aiming for. The owner even mentioned (without me commenting on it) that her machine was a little harder to use because of the weight of the computer unit on it. I'm not sure if that was valid rationale or not. Somehow I didn't think so. Those little computer units really don't look like they would weigh all that much. Not enough to significantly affect how smoothly the machine handled. Besides, I think the Tin Lizzie I used also had a computer unit on it and that was the machine I used for my first free motion quilting on a long arm. And it handled like a dream. Nevertheless, I needed my quilt quilted and I had driven all that way, so I plodded along with it. Until I was about 3/4 of the way through the job and the machine went kaput on me. I felt really bad since it happened while I was using it. But then the owner informed me that it had been acting up for awhile and she had planned on taking it in for servicing, but she had already booked another lady (who quilted a few days previous to me) and me to use it. She was hoping it would hold out until we were done. Unfortunately for me, it didn't. She offered to allow me to leave my quilt on the frame and return to quilt it later, once the machine was serviced. But I needed to turn it in for the quilt challenge, so I said that I would have to finish it on my sewing machine.
Fortunately, in my supplies at home, I have some Golden Threads Quilting Paper. I used this to trace the pantograph so I had something to follow while I finished quilting it. And here it is: 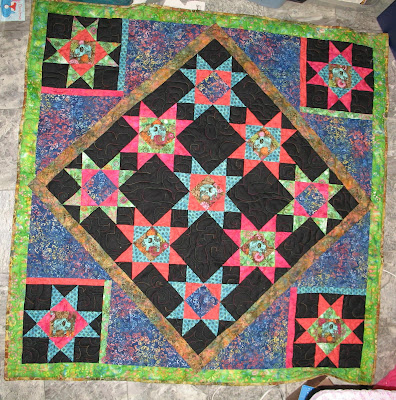 I'm quite pleased with it, though I did get some puckers in the quilting in the lower left block, which frustrates me. But I really didn't want to pick out all the stitches and requilt it. I did pick out and requilt quite a bit, but still didn't totally fix it.  In my last post I wasnt sure what I was going to use for the border, and I ended up buying this green fabric. Here's a close up of one of the corner blocks: 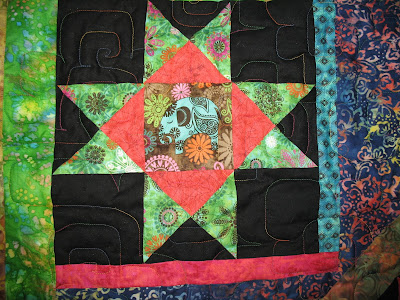 You can see that I fussy cut the elephants for the centre of most of the blocks. Finally, here's the backing: 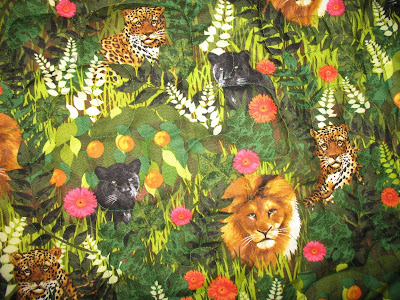 I love, love, love this backing fabric.
I still haven't gotten the Evening Snowfall quilt quilted. That will have to wait for another time. I'm really starting to think seriously about getting my own machine. I found a couple of mid-arm machines on kijiji, but they only have 9" throats, so I'm not sure how genuinely useful I'll find them. Especially since I don't really like free motion. I'd be very limited in what pantographs I could use with such a small throat space. But, I called Central Sewing Machines to see if they could give me a retail price on a Viking Mega Quilter to see if the price on kijiji was a good deal or not. The woman I spoke with said that they don't carry that machine, but hopefully could get back to me with a price tomorrow. However, as we chatted, I discovered that they still rent their quilting machines for only $15/hour (only half of what Sparrow Studioz charges) and they are available most days that the store is open, plus evenings when they're having a class there. I'm not sure where I got the idea that their prices had gone up or that the machines were only available on certain days. Obviously something in their flyer I must have misinterpreted. I'd still have to take their training course for $150, but it's nice to know I have another option for long arm machine quilting. At least until I can afford to get my own...
Posted by Laura B at 19:39