As some of you are aware if you've been reading my blog, I've been trying to de-clutter by either selling or giving away stuff I no longer need or want. (Not sure if I ever "needed" some of it, but that's a topic for another post). And I've been doing most of it on facebook. There are a couple of buy and sell pages, a silent auction page and a freecycle page for my community where I've been advertising. Some of the responses have given me some insight into human nature that I would rather do without. This morning a woman came to pick up the item that she had successfully bid on. It was a vintage "Lucky Elephant" enamal ware bowl with lid. This: 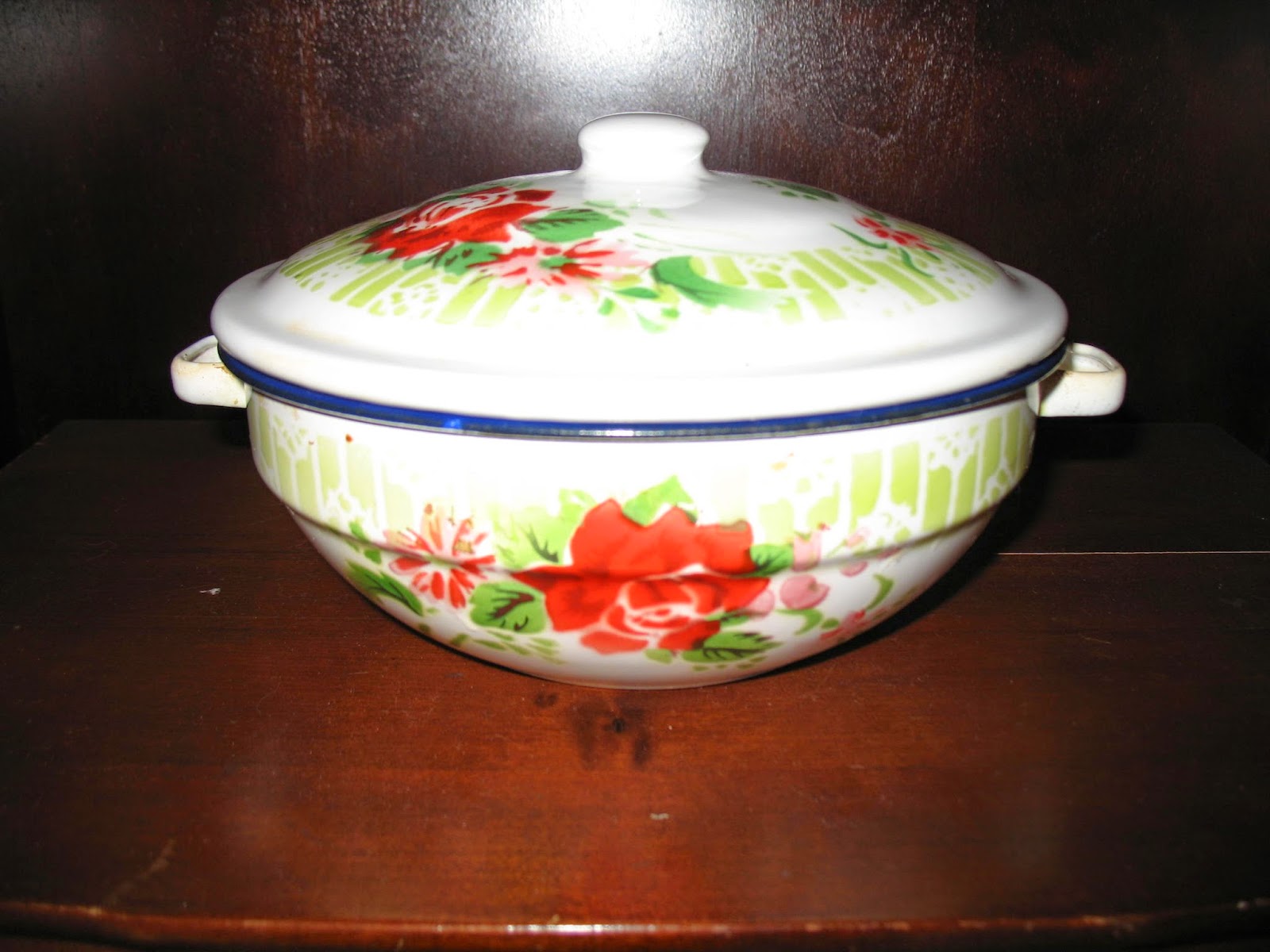 I try to be as accurate as possible in my descriptions, so I stated that this was 7.5 inches in diameter. Someone asked for a picture of the inside of the bowl, so I posted this: 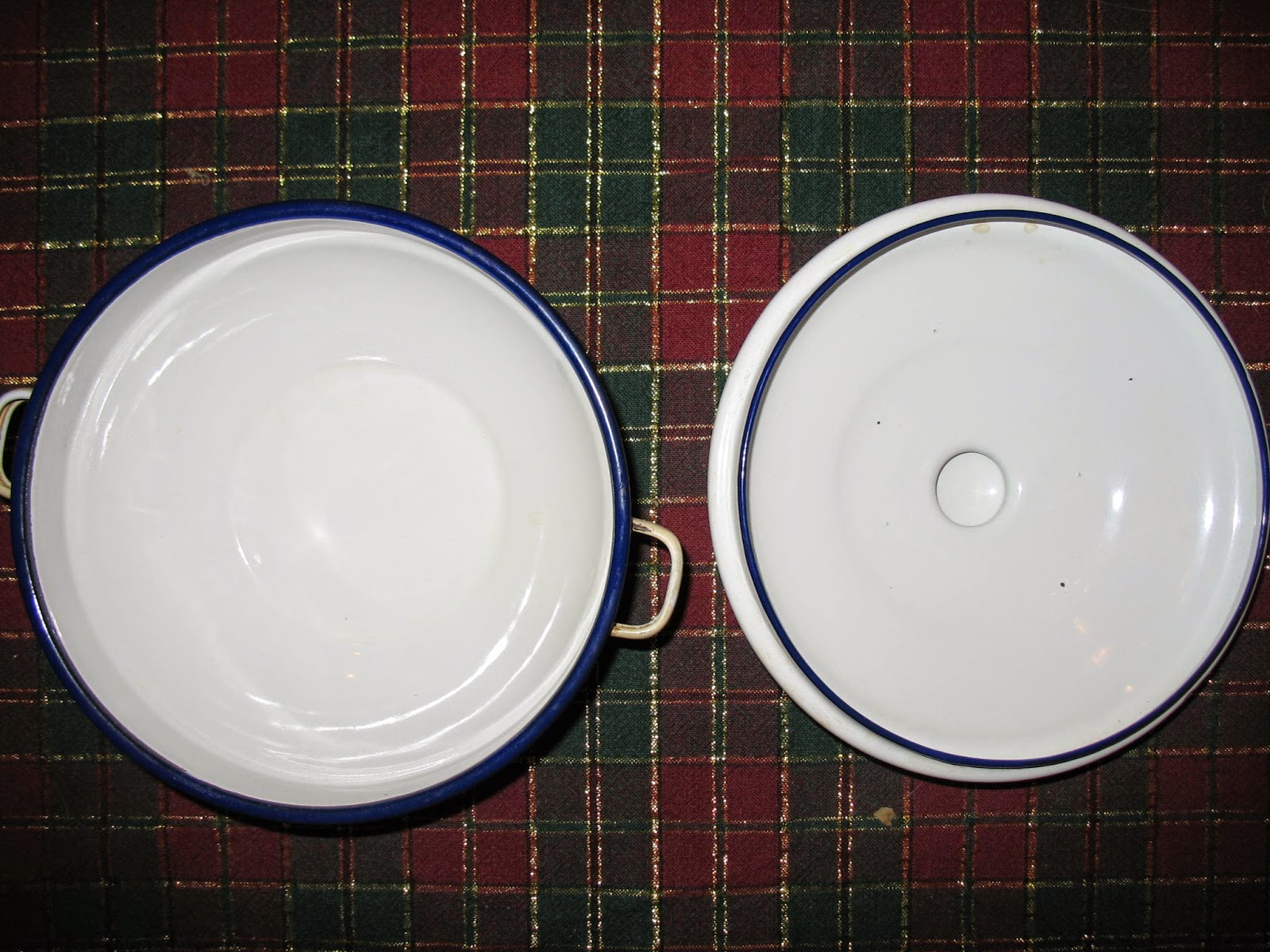 And added a picture of the trademark on the bottom of the bowl: 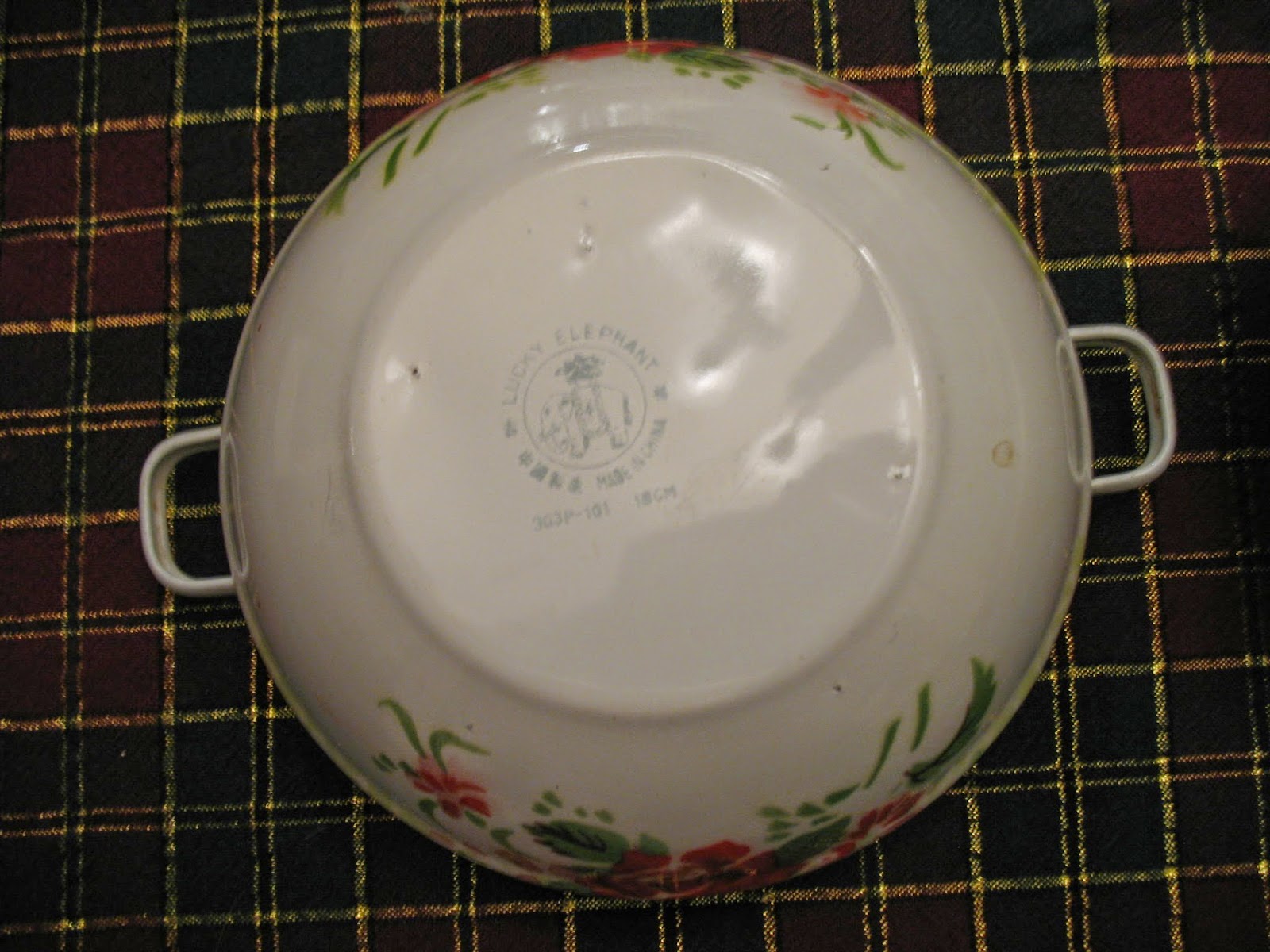 If you collected elephants, what about this bowl would compell you to buy it? The woman decided not to buy it. She said that that wasn't a very big bowl for $15, that she collected elephants and I assume that's why she bid on it...??? I did post the diameter, so what about the size didn't she understand? I see roses on this bowl. The only elephant is in the trademark on the bottom. And it is a vintage bowl. You're paying for vintage, not the size of the bowl. I'm still scratching my head over that one. As I am about another one. I posted this picture: 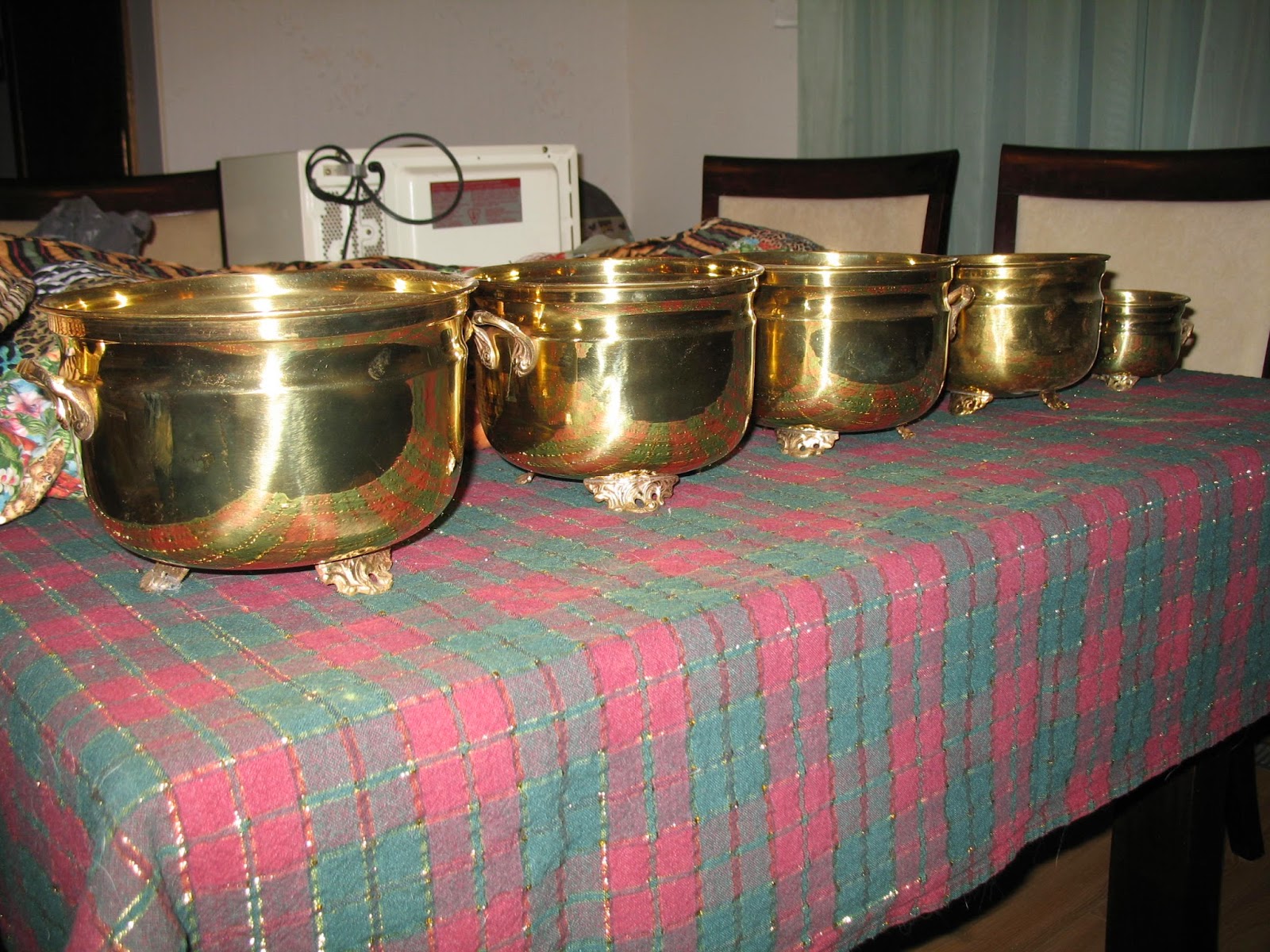 In the description, I said "Brass containers/planters" and stated the diameter and height of the largest and the smallest. A woman placed a bid and then a young man counterbid. Then he started messaging me with questions. Hmm, do you think maybe he should have asked his questions before he bid? Maybe the lady with the bowl above should have asked questions before she bid as well, like "what does this bowl have to do with elephants?" Technically, once you bid, you're committed. And a bidder with integrity will follow through with the deal even if they decide they really don't want the item. At live auctions, you'd be invited to never return to the auction house if you refused to buy something on which you were the winning bidder. This young man still had the leading bid (which was only $1 higher than the other bidder) when he asked me if they had lids. Lids??? "Why would you want lids on planters," I responded. He had not read the description and thought these were cooking pots. But he obviously had seen the picture and those "cooking pots" definitely have legs in that picture. How well does that work on your stove?
Then there is the dog kennel: 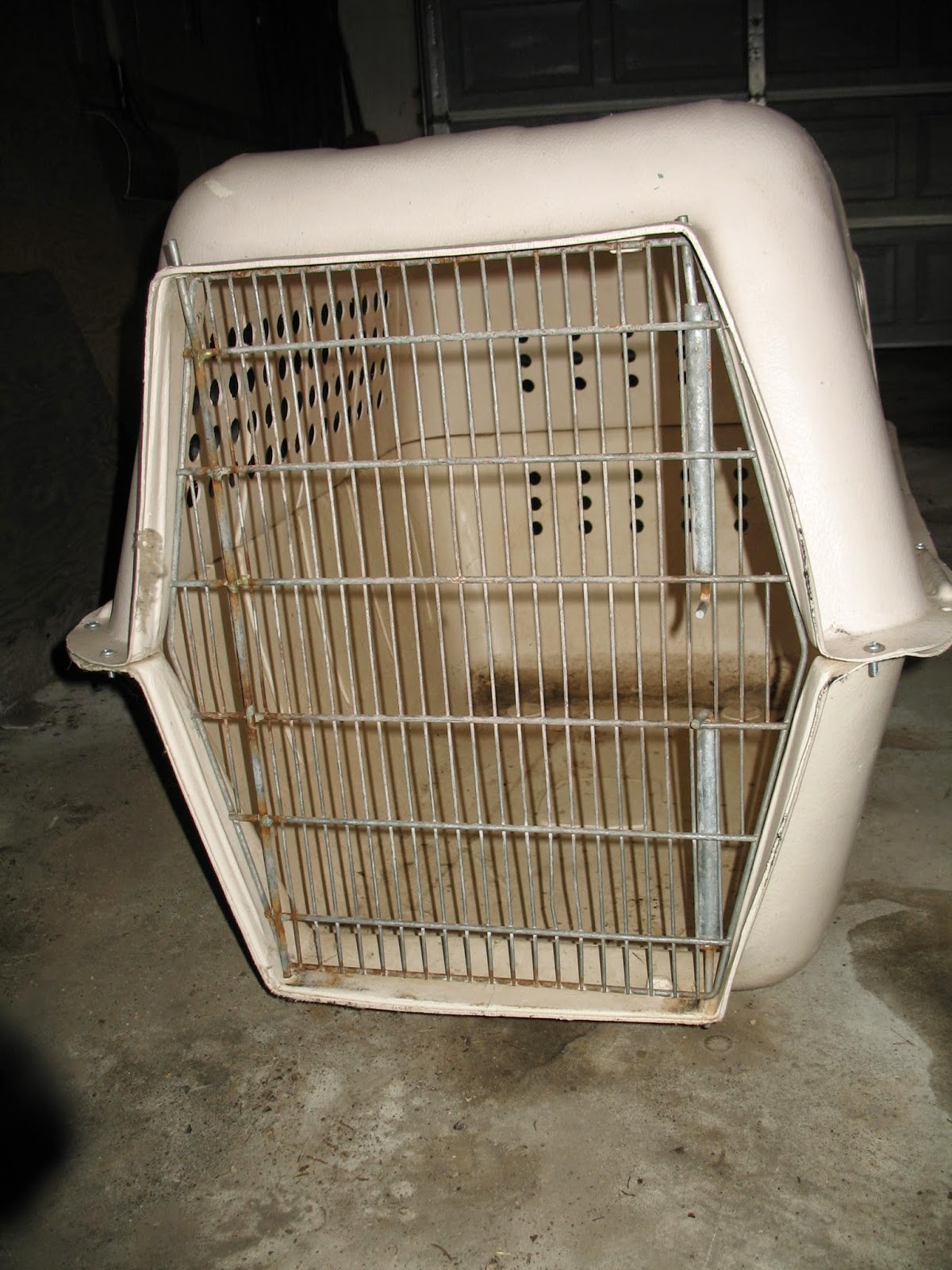 My reserve bid was $20 and I had someone offer $15. After 24 hours, no one else had counterbid and I wanted to be rid of it, so I accepted the $15. The bidder gave me his phone number and I called and left a message. He's the one that returned my phone call without checking his messages first, so he just called and asked who I was and what I wanted. And he actually asked if I could deliver it, saying that he didn't have a car. Perhaps he should have thought of that before he bid on it. I was actually going to deliver it today just to get rid of it, but again, he didn't answer the phone. Message left, but I'd like to know why I should deliver something when I already accepted a bid for $5 less than my reserve. So now I expect him to come and get it or I'm reposting it. I already reposted the "Lucky Elephant" bowl, though I added the height of the bowl and said it was probably 1950s/1960s. However, it seems people don't actually read the descriptions or look at the pictures very carefully anyway.
And yes, I'm still trying to sell the Pavillion dinnerware. I think I might see if I can "divide and conquer," sell the serving pieces separate from the actual dinnerware.