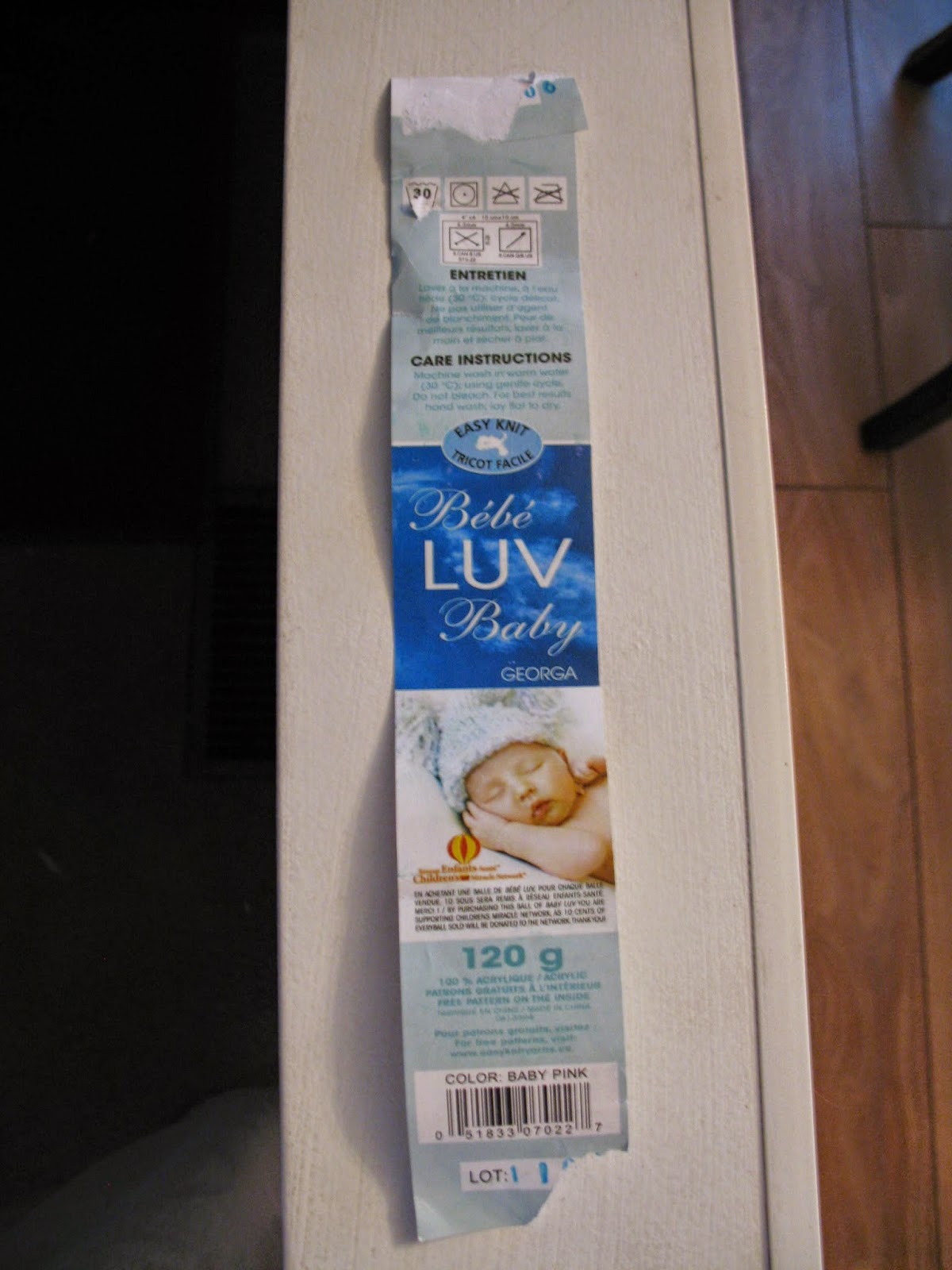 I found the yarn website here, but it still doesn't tell me what weight it is. But the label does have the recommended size hook/needle and the guage and it was the same as the sport weight that I compared it to. And it worked fine in my project.
So this is my first Bavarian Crochet project. Since I have short hair and wearing it as a head band would just make my hair stick out in every direction, I put it on as a hippie would wear it. LOL! But I don't intend to keep it for myself. I'm going to offer it to my long-haired niece. Here it is off my head: 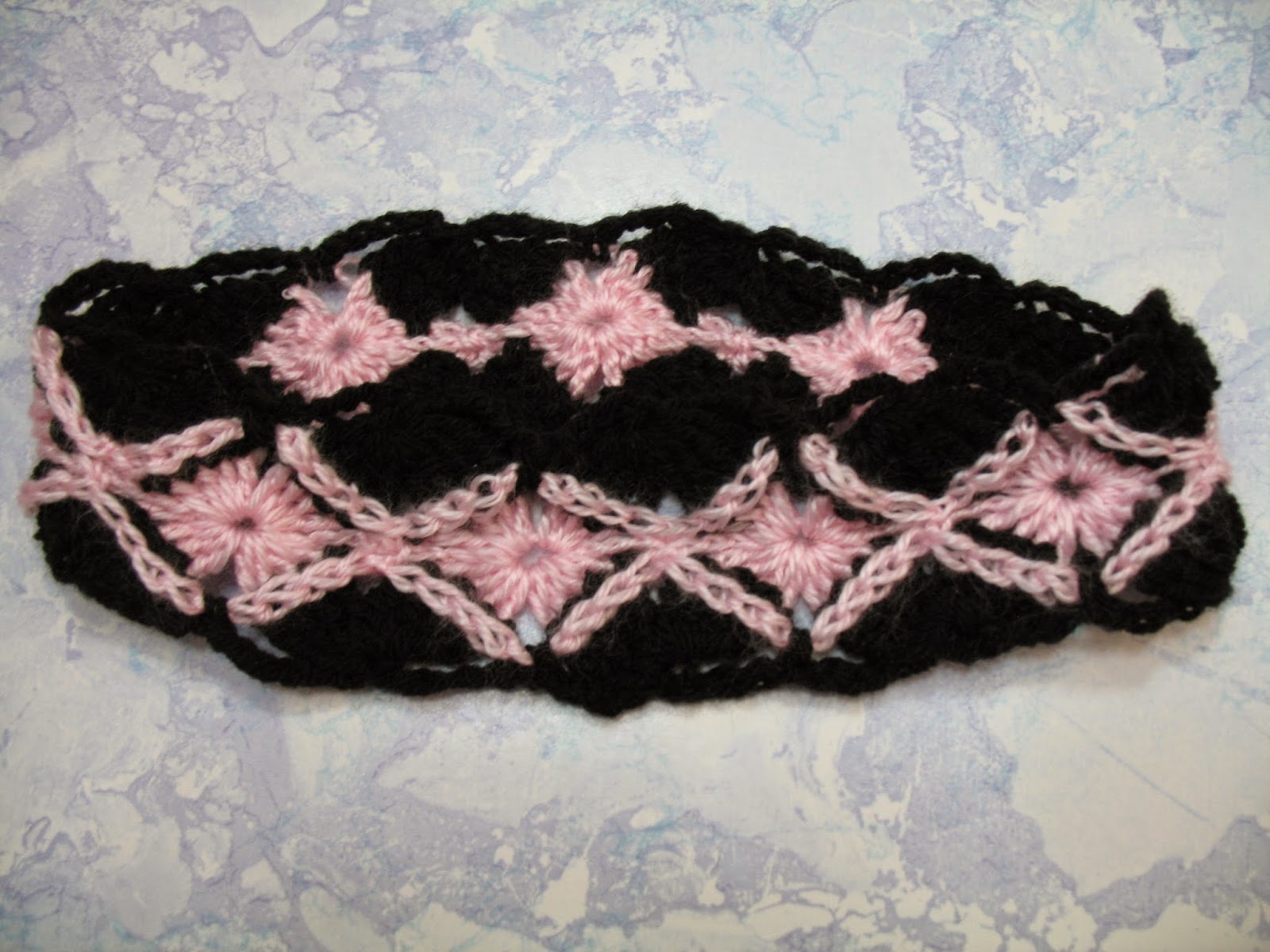 And here's my actual haul of yarn that I purchased yesterday: 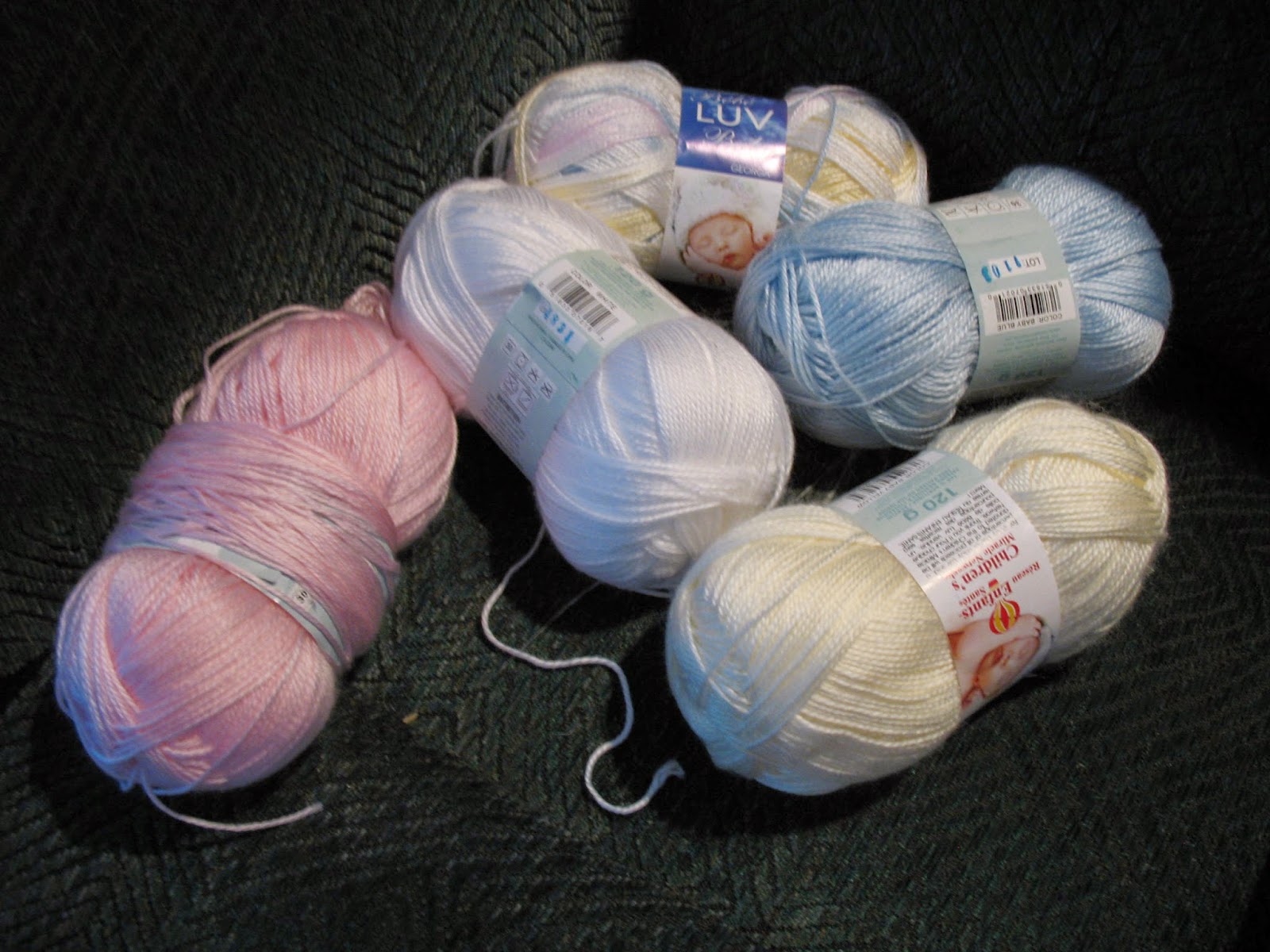 It's definitely not high quality yarn. I wasn't far into the skein when I came across a knot. I undid the knot and weaved the ends together with a darning needle, like I normally do when joining yarn. Then I noticed the yarn seemed to have gotten a lot thinner after the knot and it looked like it was missing a strand. It wasn't till somewhat further into the project that I found the other end of the missing strand. I decided not to unravel the project, cut out the thin part and rejoin the ends as it still looked acceptable. It's only a headband after all. And if my niece can find that section, she can put that part at the back under her hair. Unfortunately, this yarn doesn't have much stretch to speak of, so it's not great for a headband. But on a Sunday afternoon in a small town, I didn't have much choice for yarn purchases. Oh, and according to the label, 10 cents from each ball sold goes to Children's Miracle Network.
As you can see, I got my favoured variegated yarn, and then one ball of each of the colours in the variegated one.
The pattern I used called for a 3.75 mm crochet hook. I was actually able to find one amongst my supplies, but I found using it rather frustrating. It's 'throat' (or whatever you call it) isn't deep enough and the yarn kept separating or sliding off the hook. I do have a set of hooks somewhere (my travelling set, not my main set) that I think might contain one, but I'm not sure where that set is. The last I remember, it was in the sewing room, so maybe it's somewhere in the living room...
Yesterday, someone came and got the cookbooks I was giving away and someone else bought the vintage cream and sugar. Today I posted a vintage enamel bowl with lid and a set of brass planters. Hopefully, they'll sell as well.
I have an older dishwasher in my kitchen. It works, but not that well. I find the things on the top rack don't get very clean, probably because there is no upper water arm. So, a few years back I bought a newer dishwasher to replace it at an auction sale. Then never got around to installing it until last year I asked my ex to install it while my daughter and grandson were living with me. For me personally when I'm on my own, I would seldom use it, so it just wasn't a big deal. When my ex attempted to install the newer one, he found that I would need to upgrade both my plumbing and my wiring. It really wasn't worth it. So I sold the newer one recently and the new owner is quite happy with it. Meanwhile, I haven't use the old one since my ex tried to install the new one. Yesterday, I wanted to clean some new canning jars and lids. I always prewash new kitchen things before using them. Since they weren't actually dirty, I figured I'd just use the dishwasher to give them a hot rinse. The dishwasher was running, but it wasn't getting any water flow. I called the ex and he said that he thought he had turned the shut off valve back on and didn't know what else could be wrong. I checked the shut off valve in the basement (having fun finding it behind the dropped ceiling) and it was open. So I still don't know what's wrong with it, unless something was damaged during the attempted install last year. <sigh> Now I've got a really useless dishwasher in my kitchen. And it's probably not worth fixing. I would really rather have the cupboard space, but putting cupboards in there would probably cost as much as putting in another dishwasher. But it's not costing me anything to just sit there, so I'll deal with that some day...
That's all for now. In case you're wondering what happened to days 4 & 5 of my vacation blog posts, on Friday I really just had a lazy day and didn't do much of anything, including blog. On Sabbath (Saturday), I blogged about my thoughts on the Quverfull Movement, and that was blog enough for one day.
Posted by Laura B at 08:24