Both of my cats, but especially Mystery, like to be in the middle of whatever I am doing. I'm sure those of you with cats can appreciate this. I actually had to give up on a jigsaw puzzle I was working on. It was virtually impossible to get any of it done with a cat sitting in the middle of it. And somehow Mystery knew, even if he had been sleeping in another part of the house, whenever I sat down to work on that puzzle. Occasionally he would sprawl all over it, knocking pieces around and onto the floor. It just wasn't worth the hassle.
Machine quilting? Yes, they like to get involved in that, too.
I'm taking a machine quilting course through Annie's Crafts and this is the sample project that Mystery is testing. I decided I need more practice with FMQ before I finish it. Once it's finished, I'll write a separate post about it and the course. I was thinking it might just become a table topper. Or more likely, a cat mat. 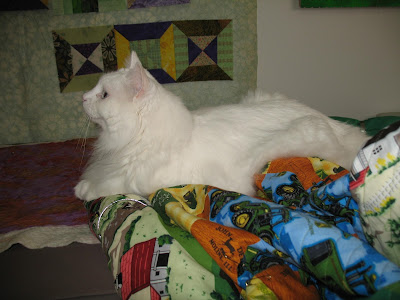 I left it on the table, hoping the cats would lie on it instead of the quilt I'm working on. So, yes, here is Mystery being quite cooperative, for the moment. Tinker was at first too. 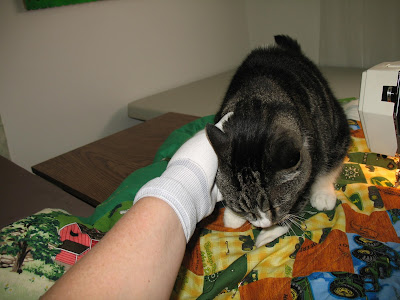 But really she needs to be up close where she can get petted with my Machingers gloves. 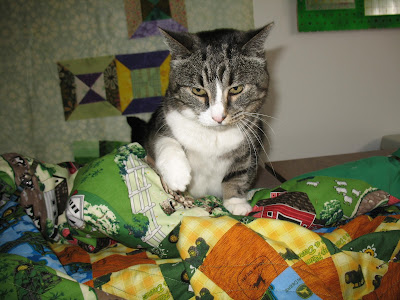 Tinker really isn't satisfied staying in one place, unless it's really close to me. 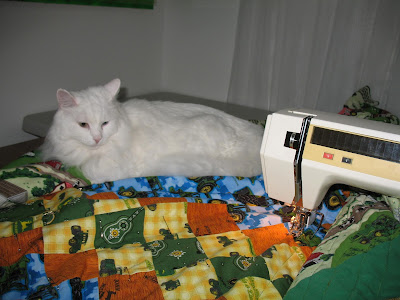 Mystery's back. He can't supervise the job well enough when he's sitting on that other project, so he had to get up closer.
And closer...
The fabric was bunching up by the cat, so I grabbed the quilt on the opposite side of him and tugged both the quilt and Mystery farther away. 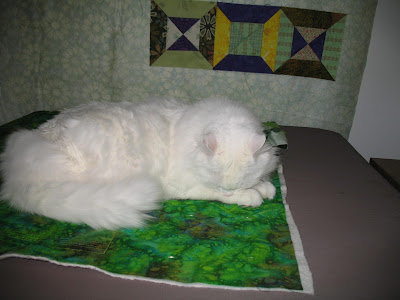 I had to turn the quilt around, so he went back to the sample project for a bath. This is the back side up. It was actually supposed to be done in solids, but how could I resist some beautiful batiks? 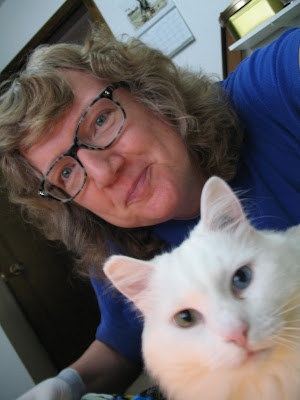 Yes, he had to move right up close and personal again. 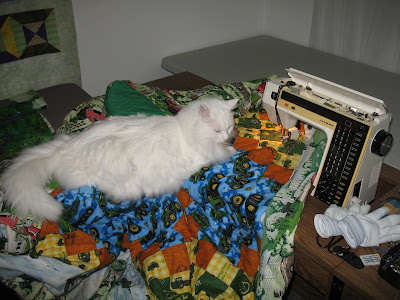 I guess I'm finished quilting for now...
By the way, that's my grandson's quilt. Since I haven't had enough practice with free motion quilting, I'm doing it all straight line with my walking foot.