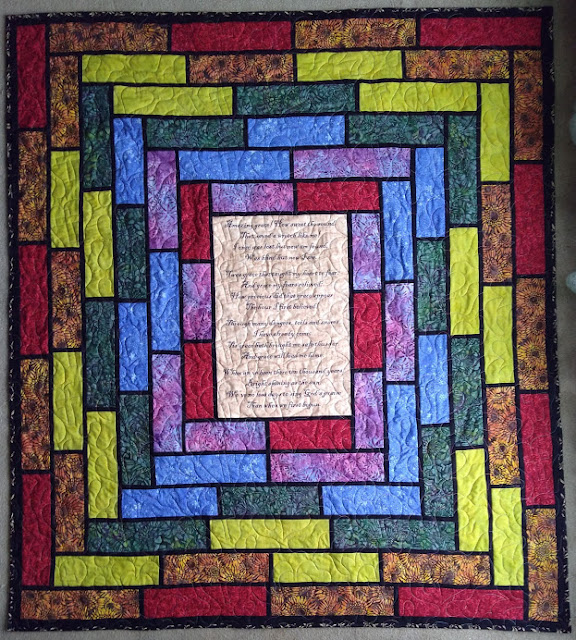 The husband of a friend from my homeschooling days was dying. We weren't really close friends and I hadn't spoken to her in years. We lived in different communities, attended different churches, and I was on a dramatically different path from what I had been when we knew each other. I went from being a homeschool mom and "housewife" to divorced career woman. Regardless, I still considered her a friend, so, when I heard the bad news about her husband, I determined to make her a quilt.

I actually started four different quilts before finally settling on this one. And I really think it's the best one for the sad occasion.

A few years ago, I purchased a panel that was composed of several smaller panels with words: Amazing Grace, the Prayer of Serenity, the Prayer of St. Francis, the Beatitudes, plus some smaller pieces that could be quilt labels and bookmarks. I had never used any of it before, but figured this was a good occasion to use Amazing Grace. So, I rummaged around in my stash trying to find something that would work with it. I found a quilt kit that I thought I could make work. It consisted of 4-patches on point in a square, alternating with fussy cut squares from a fabric that was printed as a cheater double wedding ring quilt. The instructions said to fussy cut 32 squares, but I figured I could get by with less, since I was adding a small panel. However, when I started cutting it, I realized that I was only going to get 16, or 20 at most out of the fabric, nowhere near what I needed. So, I decided not to fussy cut and try just cutting regular squares, but that looked terrible with the printed pattern. Then I pulled another fabric out of my stash that I could use as a focus fabric for the alternate squares instead. Meanwhile, I was noticing the poor quality of most of the fabric from the quilt kit: thin, cheap, not quilt-shop quality. And the alternate yardage that I pulled from my stash was even worse - it was so thin you could see through it! That stuff was given to me and I hadn't paid that much attention to it when I received it. Now I realized that there was no way I could gift a quilt made out of such cheap junk. I would use it some day to practice free motion quilting. Or something. But definitely not for a gift quilt!

Back to the drawing board and back to the stash. This time I decided to try one of the stained glass panels that I have as I had purchased sufficient fabric to coordinate with the panel. 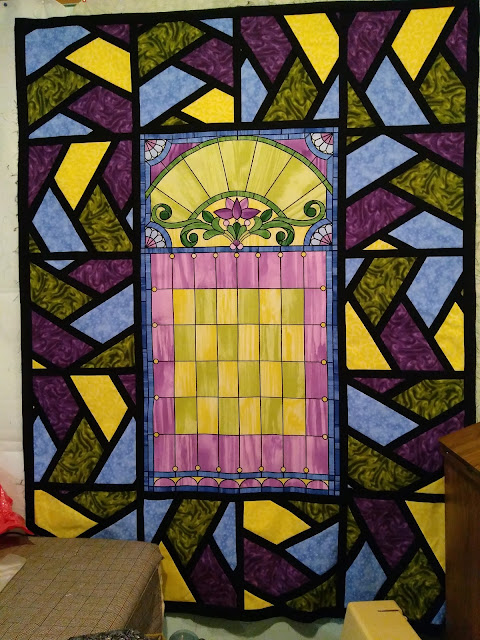 It's interesting that I had not long before this spoken with my co-worker, who is a potter, about not being able to part with certain projects. And this was one of mine. I have never had such a strong reluctance to part with a quilt. And I don't even know what colours my friend likes. What if she doesn't like purple? Or green? What if this quilt doesn't speak to her heart the way it speaks to mine? Somehow I just didn't feel that this was the right quilt for my friend.

Rummaging once more in the stash, I next started Home on the Farm, a quilt for which I had all of the fabric I needed. 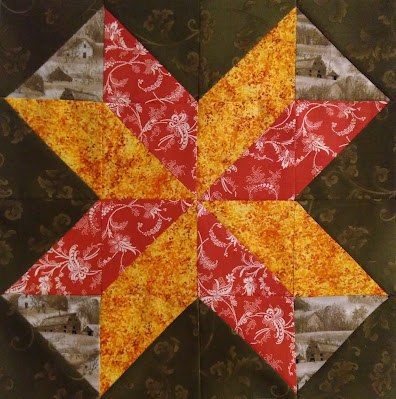 But when I posted the first finished Barbara Frietchie block to Facebook, one of my great nieces, who has yet to receive a quilt from me, loved it, as well as the panel I was coordinating it with. 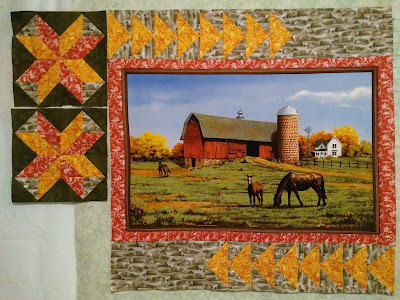 And so this quilt will likely go to her. Originally, I had planned on just surrounding the panel with the blocks, but wasn't sure if I would like the final look. And instead I added the flying geese, which I'm quite happy with. We'll see how it looks when it's finished.

I decided to go back to the Amazing Grace panel and try some other sort of stained glass look. Then I remembered some cuts of batiks that I had purchased in rainbow colours. I thought they were full metres, but it turned out that they were half metres. And that was sufficient, except that I ended up doing some creative piecing because of incorrect cuts. And I had my bolt of black Kona that I had recently purchased to use in between the batiks.

I'm really happy with the final product and I trully believe this is the right quilt for my friend. I used the Faith, Hope and Love pantograph. 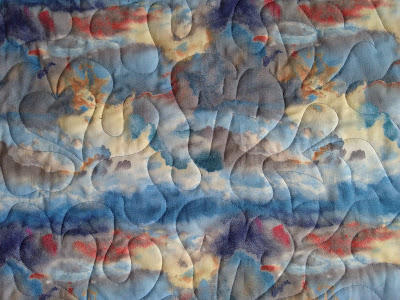 You can see hearts, crosses and doves in the stitching. I also wanted a special thread and so ordered Fantastico in the Stained Glass colourway. 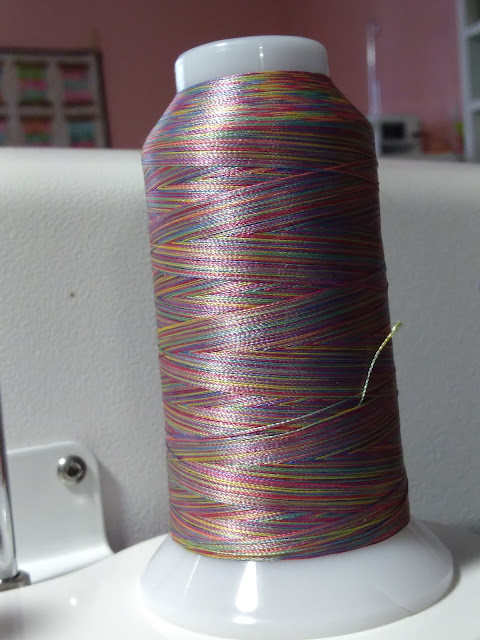 It was the first time I've tried this thread and I was quite pleased with it. I used a blue Glide in the bobbin (I don't remember which particular blue).
Sometimes I put a lot more meaning into a quilt than just "a quilt," and that's what I did with this one. First of all, there's the hymn, Amazing Grace. For this occasion, I wanted to especially focus on the last two verses,

"Real life someday." Yes, Jesus promised us not just a more abundant life in the here and now. (John 10:10), but He promises an even better life in His eternal kingdom when He comes again, a place where... "God shall wipe away all tears from their eyes; and there shall be no more death, neither sorrow, nor crying, neither shall there be any more pain: for the former things are passed away." Revelation 21:4.

Christians refer to the second coming of Jesus as the "blessed hope." Titus 2:13. And it is with this in mind, that I chose the backing fabric. I wanted something that would remind her of that Blessed Hope. 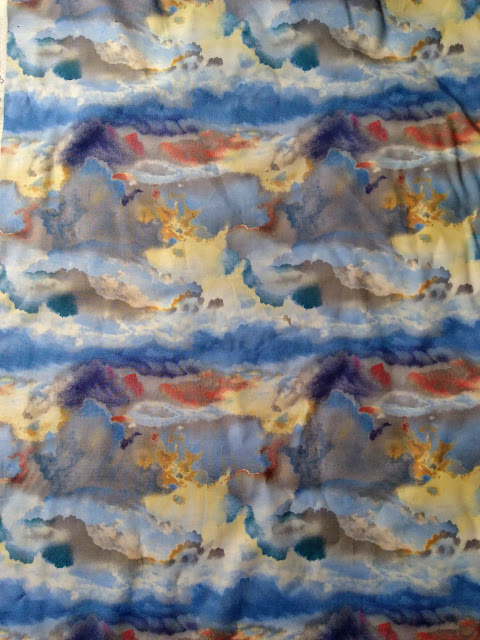 And the second is the hymn, Gleams of the Golden Morning:

The golden morning is fast approaching:Jesus soon will comeTo take His faithful and happy children

To their promised home.

Amen, Jesus will be bursting open the tombs and graves of those who loved Him, resurrecting them to reunite them with their loved ones and take them home with Him.

You'll also notice that there are some dark clouds in the backing fabric. These  remind me of a quote from one of my - and that of my friend's - favourite authors, Ellen G. White in the book, The Great Controversy, p. 640:

Soon there appears in the east a small black cloud, about half the size of a man's hand. It is the cloud which surrounds the Saviour and which seems in the distance to be shrouded in darkness. The people of God know this to be the sign of the Son of man. In solemn silence they gaze upon it as it draws nearer the earth, becoming lighter and more glorious, until it is a great white cloud, its base a glory like consuming fire, and above it the rainbow of the covenant. Jesus rides forth as a mighty conqueror. Not now a “Man of Sorrows,” to drink the bitter cup of shame and woe, He comes, victor in heaven and earth, to judge the living and the dead.

Notice in the quote "the rainbow of the covenant." We also know, from Revelation 4:3 that there is a rainbow around the throne of God and that the foundations of the New Jerusalem are arranged in the order of the rainbow (Revelation 21:19-20), in addition to the rainbow of promise after the flood (Genesis 9:12-17). So, I chose a rainbow of colours for the fabric in the quilt top as well as the thread to quilt it with. It's a reminder that God is faithful, that He keeps His promises and that He will come again.

Finally, as I was considering fabric for the binding, the verse came to mind, "The leaves of the tree were for the healing of the nations. (Revelation 22:2). These are the leaves of the Tree of Life in the New Jerusalem. And so I chose a fabric with leaves as a reminder that God will heal us physically, emotionally and spiritually.

So, it's my prayer that my friend will find this quilt a comfort and a reminder of God's promises. Now to get it packed up and ready for the mail tomorrow.
Posted by Laura B at 13:56