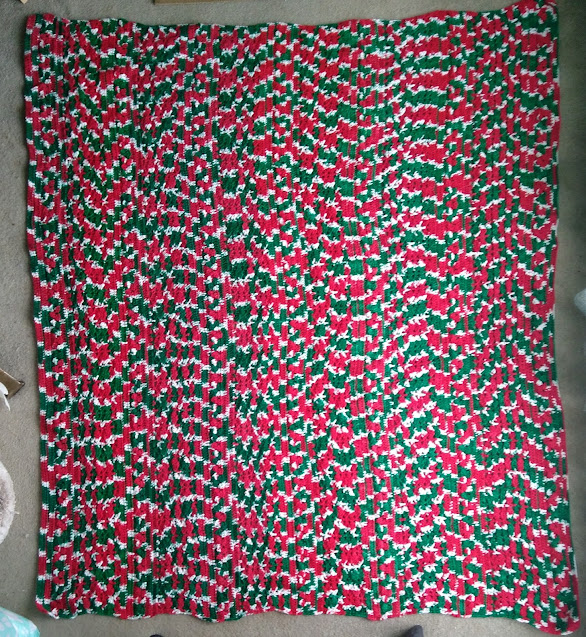 This afghan actually started out as a loom-knitted project after I purchased the afghan loom and wanted to try it out. I soon discovered, however, that not only can I knit faster with needles than I can on a loom, but the pegs were so closer together that wrapping the yarn around them was tedious and frustrating. So, it sat around for awhile until I finally decided to remove what little I had accomplished, unravel it, and start fresh with a different project.
As you may be aware, my goal is to make at least one project from every craft book I own. If only I would quit buying more books at thrift stores, I might actually be able to accomplish this goal. Nevertheless, I selected from my library the Mary Maxim book Timeless Treasures, and chose a pattern that suited the amount of yarn I had on hand, Ribbons and Lace. Or so I thought. Apparently, I tend to crochet larger than guage (I never do a sample swatch to check my guage, especially not with afghans) and ended up having to buy extra yarn. Even though I didn't add the fringe included in the pattern. (I'm not a fan of fringe on afghans. What is it good for? Besides getting tangled up when you wash the afghan). So, what was supposed to be a 48" x 56" afghan ended up 58" x 67". I got to the point where I had only 3 rows left, and only had a short string of yarn remaining. So one more skein of yarn was purchased, and the afghan was finished today.

I love variegated yarn, but find that it makes the actual pattern in the design indistinct. I found the same thing with the Lace Enchantment afghan. And this one actually called for a contrast yarn, which I think would have enhanced it, but I'm not redoing it now. The pattern also called for restarting each row at the same end and working into the back loop. I found that a ridiculous idea, especially restarting each row - imagine all of the ends to work in! Initially, I did start working in the back loop, and then into the front loop on the following row for the part of the pattern that called for that, but I didn't really feel it made that great a difference in the look of it, so just started crocheting normally for all rows.

Another WIP finished, which is likely my final finish for 2020, unless I actually get some potholders made...