I started out in loom knitting when I found 3 out of the 4 sizes of round looms at a thrift store (I later found the fourth size). I started with google and found some youtube videos and websites on various loom knitting projects. I began with a pretty basic cowl.


Then I used a youtube tutorial to make a Seed Stitch Cowl:

This yarn is so bulky that I couldn't tell what the pattern actually looked like and whether I got all the stitches correct. Then I tried a hat 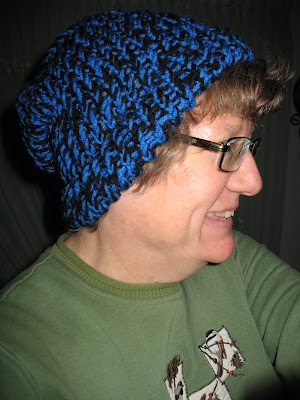 and a scarf. I don't remember where I got the patterns for either of these. 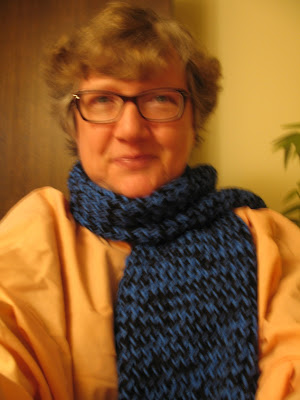 For Christmas, I bought myself the set of long looms.
However, I felt like I needed a basic guide for using knitting looms. I like books and I really like to be able to have a handy reference that is available when I'm not on the internet. So far I don't own a tablet or a smart phone, so having to go to the computer every time I want to access information on a particular subject gets rather tedious. So I ordered myself a couple of basic books on loom knitting.

Both books offer very straightforward instructions for the basics: casting on, casting off, different stitches and include pictures for clarification. The projects are mostly beginner to easy level with one or two intermediate projects thrown in for an added challenge. I would recommend both for someone starting up in loom knitting.
Starting with the circle loom book, I produced this At-Home-Comfort Sock from Premier Yarns Mega Brushed Chunky in Carousel: 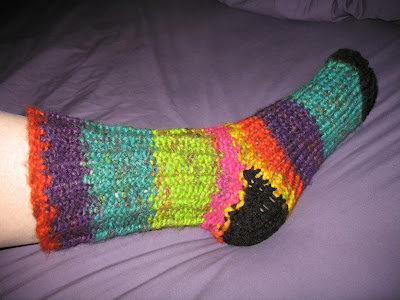 I didn't realize it was a striping yarn, but I just love the vibrant colours. The heel and toe were done in Red Heart Comfort Chunky. I'm not entirely happy with how the heel turned out, but for my very first ever sock, it's not too bad. Here's the finished pair: 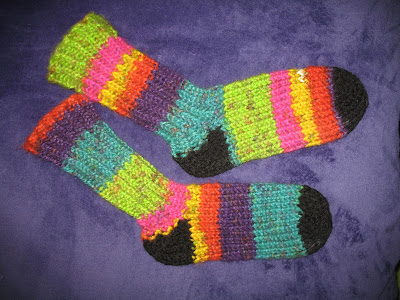 As a woman with size 11 feet, I added 3 rows to the 9/10 size foot and they actually ended up a little too big, but they will keep my ankles nice and toasty during the winter, especially when I'm working in the basement, where it's cooler. 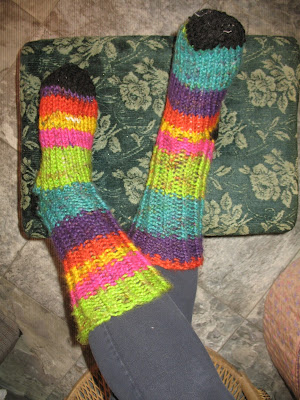 I moved onto a long loom project and started the Woodsy Warmth Shawl, using Premier Yarns Aurora in Rosehip. Initially I thought I'd give it a little more textural interest by using the twisted stockinette stitch instead of the regular stockinette. However, I realized this was going to use more yarn, so I ripped it out and started fresh using regular stockinette stitch. The pattern calls for a 4 (worsted) weight yarn, but this yarn happens to be at the heavier end of that weight category and has less yardage per 100 g ball than the yarn used in the pattern (Red Heart Collage), so I did end up buying more yarn just in case.
As I was knitting along, I noticed that the shawl was longer on the sides than it was in the middle. I was hoping this was just a result of the stitches being on a loom and not a needle and would work itself out. While this is likely part of the issue, I then noticed that the loom was bowed inwards in the middle. 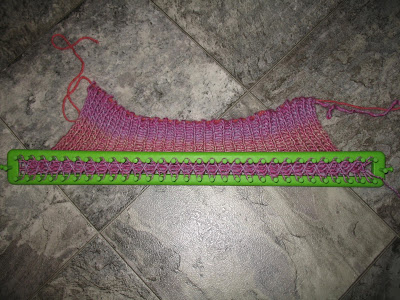 This was making the stitches looser on the ends and tighter in the centre. I assumed that it was because I was wrapping the yarn too tightly, but then I also noticed how I was holding the loom. 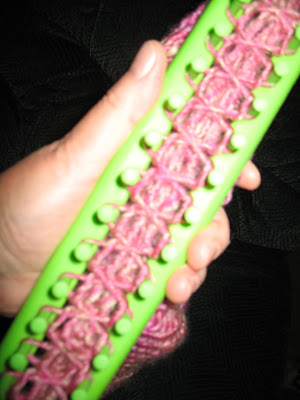 While my hand is rather relaxed in this picture, it doesn't take a whole lot of pressure to bend the sides inwards, thus allowing you, unconsciously, to wrap the centre stitches tighter. This is not a subject that was dealt with in the book on long looms. Indeed, most of the pictures that showed the instructor holding the loom, it was in this position. So I made a conscious effort to hold the loom differently, either holding it only by one edge 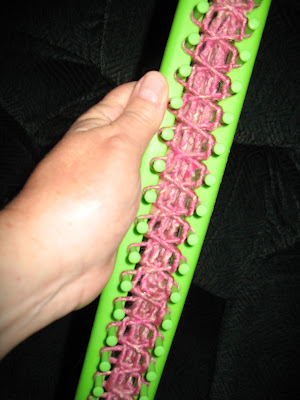 or by holding it only on the end, where it won't bow. 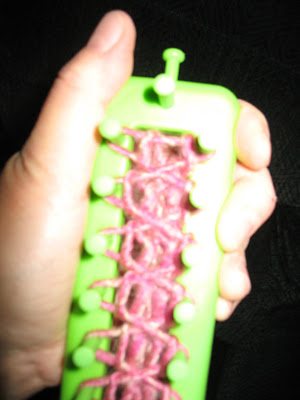 Furthermore, as I really didn't want to rip out what I had completed so far (especially since I'd already ripped it out once when I decided to change stitches), I wedged a couple of nickels between the two sides of the loom. 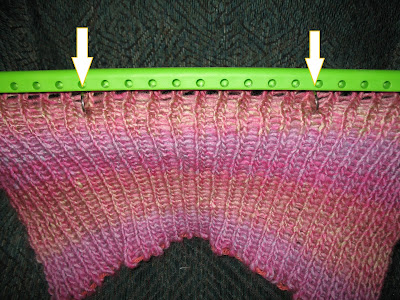 This kept the sides separated while I wrapped and knitted the next few rows so that I could get my centre stitches back to the tension they should be.
I actually packed this project (which was on the longest loom) into my suitcase when I went on vacation. I finished the main part while in Ontario and blocked and fringed it when I got home. And the finished project: 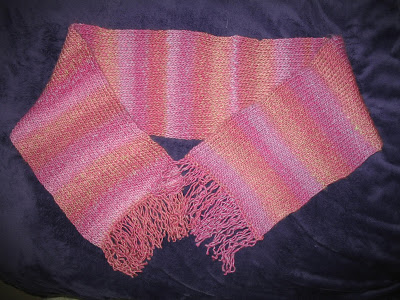 I'm very happy with how it turned out. This was a gift for my niece, Julie, for her birthday.