I have to admit that doing book reviews for craft or cookbooks when you receive a free digital copy can be challenging. In order to review them, I like to actually cook from the cookbook, or make something from the craft book. Kindle is not the most friendly way to do this. It's a little more cumbersome to "flip" back and forth between pages on a Kindle, and pictures don't always appear to their best advantage and if you need to print anything out, or copy it, like a template, that's just not possible. Occasionally, I receive an Adobe Digital Edition of a book, rather than a Kindle edition. The pictures might appear better on my PC monitor than on the Kindle greyscale, but it definitely isn't as portable. And it's still not printable. Plus these editions have a time limit (54 days), so I've got a limited time to read and create.
I received this particular book as an Adobe Digital Edition from Net Galley. One of the things I found challenging was that the fabric measurements - especially the fractions - were very difficult to decipher in this edition. I tried zooming, but they just became blurred. However, I could still guestimate and I bought sufficient fabric to make the Fractured Pinwheels quilt from this book. Unfortunately, before I had a chance to work on it, my copy expired. However, I did a little research and discovered that this isn't a new book at all. It's a reissue of this one:
I borrowed the older one from the library so I could make the quilt and finish the review. Once I got the hard copy, I could understand why the fractions were so challenging to read in the digital edition. They're not even that easy to read in the actual book - quite tiny. There is plenty of white space on each page, so the publisher really should increase the font size, so that it's easier to read.
The "24 hours" in the title does not include quilting and binding. But most of the quilt projects have a substantially smaller time allotment than 24 hours. However, I did find that my project took a good deal longer than the suggested 5 hours, but it still was a relatively quick quilt top. And I didn't follow the directions exactly. I did some things out of order because I wanted to work up a few blocks so that I could get an idea of what it was going to look like.
Here's the finished quilt top: 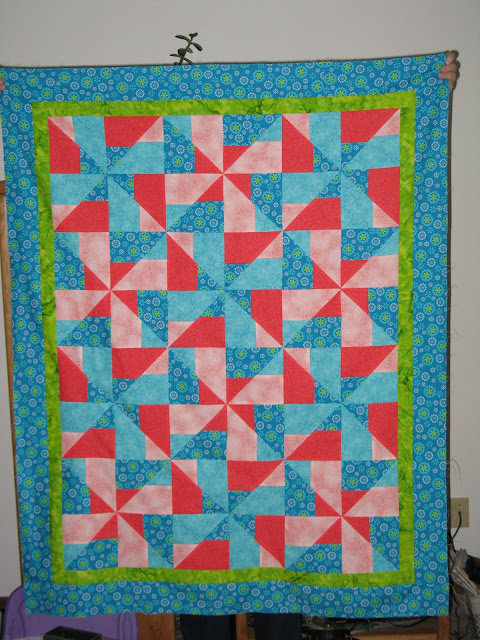 I think it's a pretty amazing looking quilt that appears more complicated than it is to construct. After cutting strips, you sew the light strips together and the dark strips together, then cut the strip sets into 6-1/2" squares. Then you cut the squares on the diagonal. But you have to ensure that you cut all of the dark squares and all of the light squares the same way. That's the tricky part. But you just have to follow the diagrams in the book. I wondered why the author wasn't using the half square triangle technique where you draw a diagonal line on the back of one square, sew a quarter inch on each side of the line, then cut on the line. But I assume it's because it would make it a little complicated keeping all the squares going in the right direction. I followed the instructions for the first square, but I hate cutting and sewing on the diagonal. I have enough trouble keeping my squares square. So I decided to try the half-square triangle technique - and it worked. I had at least one square that I sewed together incorrectly, but I checked before cutting and was able to remedy it. And I finally got a system where I had the squares laid out correctly preparatory to drawing the lines. 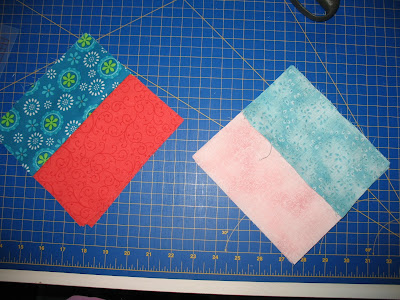 The lighter squares are face down in this picture. This is the direction you need to lay all of them out if you want to do it this way. 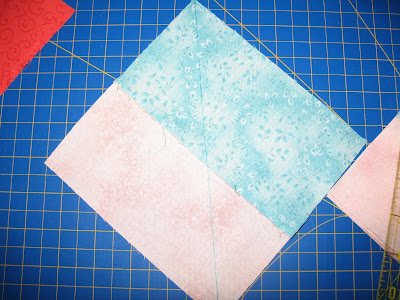 Sorry, the line is rather faint in this picture, but this is the direction you need to draw the line, then place it directly over the darker square.
One other thing I noticed in the cutting directions is that the author has you cutting more pieces than you need for the borders and binding. The first border said to cut 5 and I only used four. For the second border, I decided to cut what I figured I would need, which was 5 whereas the instructions called for 6, and I had plenty. Ditto for the binding, though I haven't bound it yet, so it remains to be seen if I will need the 6th one. I doubt it.
Overall, I found the directions pretty straightforward and easy to follow. A few of the quilts look rather boring to me, but the majority of them are ones I would be happy to make. As a matter of fact, I liked this book well enough that I ordered my own copy. But I ordered the older copy for $2.96 plus shipping!
Posted by Laura B at 16:51