Tumor Me: The Story of My Firefighter by Judith DeChesere-Boyle, 2014
I've been home sick with a gastro-intestinal virus this past week and about all I felt like doing was reading. So I downloaded a couple of titles from NetGalley to the Kindle app on my Android tablet: Tumor Me, the one I'm reviewing today and Last Chain on Billie, which will be reviewed at a later date.
I was provided a free electronic copy of this book through NetGalley to review it. Otherwise, I have received no compensation for this review.

The author of this book is a retired high school English teacher, someone who should know that profanity is neither appropriate, nor necessary. I had no need, nor desire to "listen" to her potty mouth. While the use of the f-bomb and other expletives was not profuse, once is once too often. Even in reading Last Chain on Billie, when it described animal handlers screaming obscenities at the elephants, that book's author did not find it necessary to spell it out. I'm not sure why Ms. DeChesere-Boyle did. On the other hand, she also found it necessary to throw in a lot of medical jargon and correct anatomical names, which would mean nothing to the average reader. While perusing my nursing textbooks, I expect to run across this terminology, but it did nothing to enhance, and in all likelihood would detract from, the average reader's enjoyment of this book.
Subtitling the book, The Story of My Firefighter is, I believe, a misnomer. Tumor Me is  really a mother's story of her journey through her son's illness and death, and not so much the story of her son. Indeed, I got to know Billie the elephant from Last Chain on Billie better than I got to know Alex, the key character in Tumor Me. Telling us that Alex is a nice guy is one thing, but actually developing his character through the writing so that we know that for ourselves is quite another. This book did the telling, but was short on the developing. When it reached its inevitable conclusion, Alex's death, I was sad, like I feel whenever I hear about someone dying too young, but I did not feel a sense of loss, like I would have if I had gotten to know and appreciate the person he was through the pages of this book.
Part One - Background Check is a series of disjointed and choppily written vignettes, intended to introduce us to Alex and "give insight into the person Alex was," according to the author. If she had fleshed this part out better, she might have achieved her goal. I found this section so frustrating that I almost quit reading the book, but I persisted, hoping that the main part of the story would be more cohesive and smooth. It was. But instead of the poignant story of love and loss that I was expecting, it was more a relating of diagnosis, treatment options and results, medical incompetence, more treatments and eventual death and funeral, with a history of Alex's relationships with women and career tossed in. It was interesting, but it didn't move me. And I expect a story like this to move me. I got to the end of the book and I still didn't know Alex and his mother. And the secondary characters were like cardboard cutouts that were moved in and out of the scene as rapidly as possible.
I hope this book was a catharsis for the author, and she definitely does have my sympathy, but I feel that it would have been a better read if she had focused more on developing Alex's character and less on his disease process.

~
And since I'm "yarning along," I'll share one of the yarn projects I'm working on. It seems like I've been working on the Lace Enchantment afghan forever. It didn't help that somehow or other I ended up making it over 10 inches wider than it's supposed to be. It's a good thing it's an afghan and not a garment! It's actually about the correct finished size now, except the dimensions are in the wrong directions, so I could quit if I wanted to. But I think I will continue and make it larger, so there's more to snuggle under. 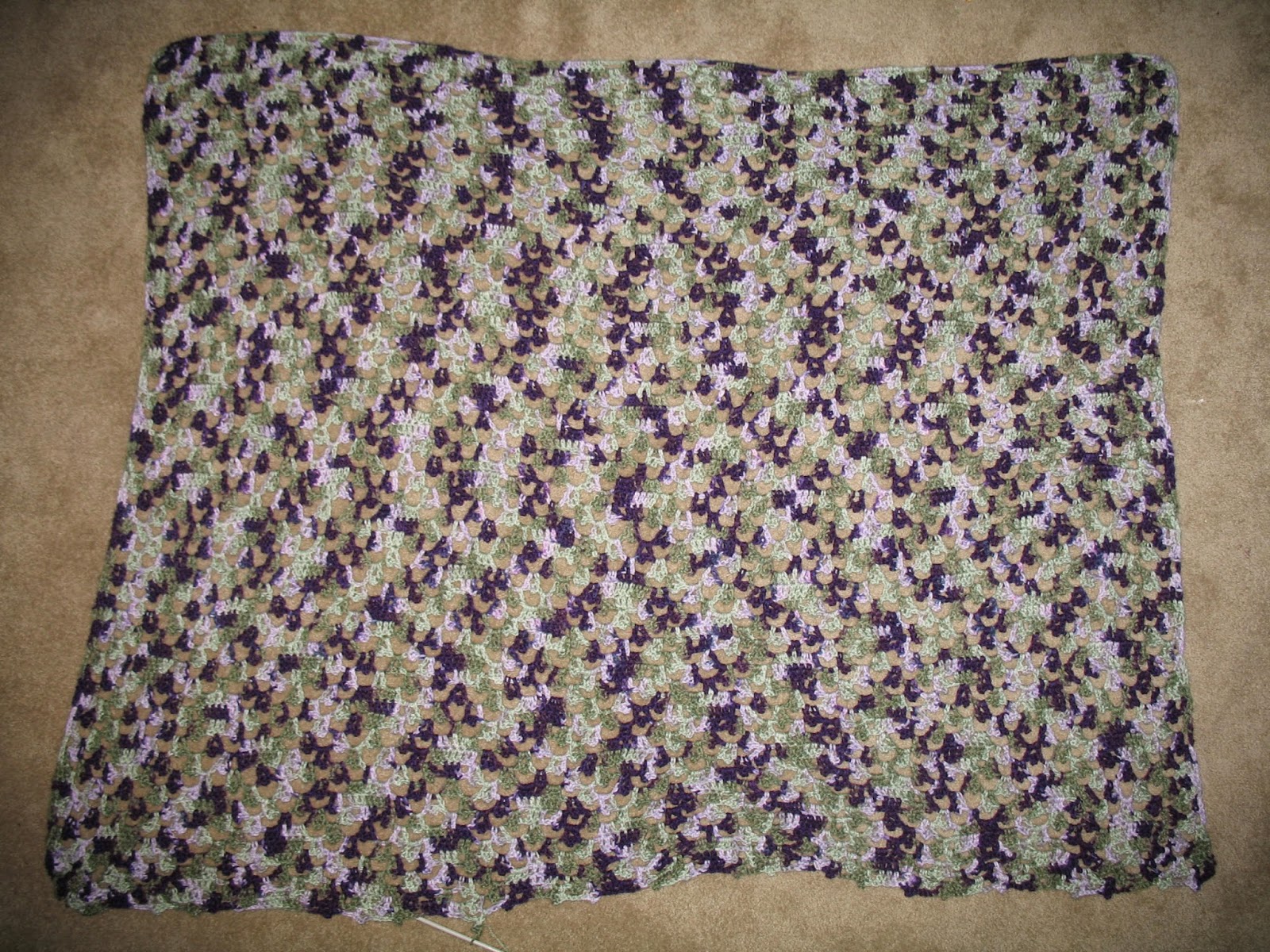