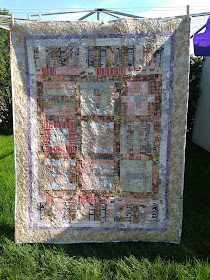 I bought the jelly roll used in this quilt at a Christmas craft and bake sale this past year. It's Tim Holz Eclectic Elements, and it was only $10. A steal, really, and the fabric is quite interesting: dictionary pages, music scores, posters, lepidoptera, maps, etc. Definitely eclectic. So it appealed to me for it's uniqueness. However, if I had to do it over again, I would likely have used it in a larger quilt with a darker or brighter coloured fabric for contrast, because, as you can see, it's mostly beige. Boring Beige, which is what I could have called this quilt, except that that's not a very appealing name. So I chose Neutral Territory. And it has so much neutral and so little contrast that you can barely discern any pattern. I used the 9-Patch pattern in this book:

It's a nice and reasonably simple pattern, but unless you get up close and personal with this quilt, you really can't see it. But I was really just putting this quilt together to have something to practice with my Amara as I was still having issues. And this time the cotton thread misbehaved, but with the help of a piece of batting in the thread guide above the cone of thread, I was able to use polyester. This was good news since I've got several hundred dollars tied up in polyester thread. And, to give this quilt a little more pizzazz, I chose the Funky Music pantograph by Beany Girl Quilts from Willow Leaf Studio. It's challenging and the quilting is quite dense. Maybe overkill? But it was fun and I was pleasantly surprised that it turned out looking as good as it does. With all of those corners, angles, straight lines, I really wasn't sure how well it would turn out. 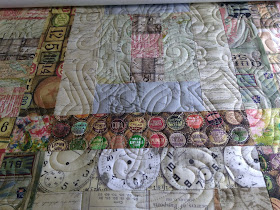 But they are readily identifiable music symbols. And I used leftovers from the jelly roll to make a scrappy binding.
Another note about this jelly roll: pieces not all the same width or length (not as bad as the non-jelly roll I used in Baby Blues, but enough that it was frustrating), and most of them were actually a little wider than 2½", which threw my blocks out. And just saying, if I haven't said this before, I really do NOT like pinked edges. They're too inconsistent in where the actual precut measurement falls. These ones seemed to fall somewhere between the peak and the valley.
Now I have to figure out what to do with this quilt. It wasn't made with any particular recipient in mind. Maybe I should just use it as a dust cover for my Amara. Perhaps I shall try to sell it. I certainly could use the money. I've overspent lately on fabric (no surprise there) and really should start earning some extra money to pay for my extravagance. 😁
Laura B at 11:07
Share